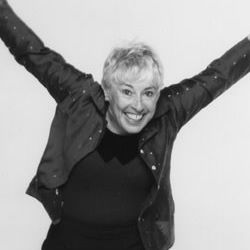 Recognized throughout the world as a leading exponent and innovator in the tap world, Ms. Bufalino performs, lectures, and teaches master classes and workshops throughout the United States, Germany, Italy, England, France, Israel and Australia.

She has appeared as a guest soloist in such prestigious arenas as Carnegie Hall, Avery Fisher Hall, The Apollo Theater, The Brooklyn Academy of Music, The Smithsonian Institute and the Kennedy Center.

A trailblazer in the renaissance of jazz and tap dance, Ms. Bufalino has been one of the guiding forces in the creation of numerous Tap Festivals, Summits, and Reunions.

Ms. Bufalino has also made her name as an author, actress, producer, director, vocalist and performance artist. Her one-person shows, "Cantata & The Blues," "Journal Of A Woodpecker,"

"Unaccompanied," and the Tap Opera "Gertrude's Nose", have delighted audiences in New York City, and on tour throughout the U.S. and abroad.

She has appeared Off Broadway in "The Courtroom" directed by, and starring Bill Irwin, and she produced and directed the award winning documentary, "Great Feats of Feet: Portraits Of the Jazz Tap Dancer" featuring Charles "Honi" Coles and The Copasetics.

In 1986, in order to develop her choreographic concepts of tap fugues and counterrhythms, Ms. Bufalino created The American Tap Dance Orchestra. The ATDO's concert, stage and film highlights include: PBS "Great Performances/Tap Dance in America," "A Night of Tap At The Apollo Theater," "The International Festival of the Arts in Central Park," and seasons at "The Joyce Theater,"and "Dance Theater Workshop." International appearances include performances in Bermuda, Germany, and Rome. For the State Department the company performed in Turkey, Cyprus, Poland and the Baltic States.

A writer of essays and numerous articles, Ms. Bufalino also wrote the forward and afterword for the reissue of "Jazz Dance."

Ms. Bufalino has created many vocal/tap CD's, Instruction and Concert Videos, and many companies throughout the U.S. have commissioned her choreography. She collaborates regularly with musicians, vocalists, composers and mixed media artists.

She has been awarded numerous National Endowment Fellowshipsand is a NYFA Fellow. Ms. Bufalino has been honored by the Tap Community in New York City and Boston with the presigious "Flobert Award" for outstanding achievement, and "The Tapestry Award" for her contributions to the field of tap dance. Her biography appears in several editions of "Who's Who in American Women."

Brenda Bufalino performing the Too Tall, Too Small Blues