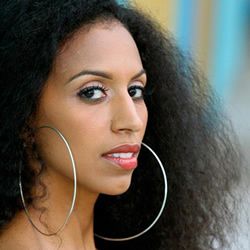 Chloe Arnold Is an International Tap Star. Her latest hit, BEYONCE TAP SALUTE by her company Chloé's Syncopated Ladies, has gone viral, reaching over 400,000 hits in under 36 hours from the endorsed by Beyonce herself, "They Killed It". (syncopatedladies.com).

As a leading lady in the Art Form of Tap, Chloé has wooed audiences in over 21 countries and 35 states. Her work can be seen on film, television, and stages worldwide. Co-Founder of DC Tap Festival and Co-Director of LA Tap Festival, Chloé's most recent highlights include a recurring role as an Onyx Girl on HBO's Boardwalk Empire, Choreographing a commercial for Canon, performing at Madison Square Garden for the opening of the NY Knicks 2013-2014 season, working with Beyonce on the 2013 Pepsi and H&M campaigns, guest performing on NBC's America's Got Talent, ABC’s Dancing With The Stars and FOX's So You Think You Can Dance, a sold-out NY run of her One Woman show My Life. My Diary. My Dance. at La MaMa in New York City, Global Fusion Concert in Dubai with 10 of the world's most accomplished musicians, and performing with Chloé's Syncopated Ladies at the star-studded “One Night Only” Homecoming Gala Concert Cabaret at the Howard Theatre in Washington, DC.

Chloé is also a female entrepreneur that holds an Ivy League degree from Columbia University. She and her sister co-founded Chloé and Maud Productions and DC Tap Festival, and currently produce a travel web series, Chloé's World and co-producing a documentary TAP WORLD with Hollywood Executive Producer Dean Hargrove. For more information: www.chloearnold.com