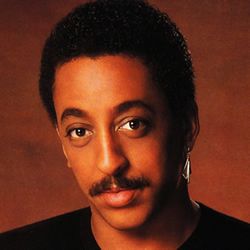 Gregory Hines (14 February 1946 - 9 August 2003), jazz tap dancer, singer, actor, musician, and creator of improvised tap choreography, was born in New York City, the son of Maurice Hines Sr. and Alma Hines. He began dancing at the age of not-quite-three, turned professional at age five, and for fifteen years performed with his older brother Maurice as The Hines Kids, making nightclub appearances across the country. While Broadway teacher and choreographer Henry LeTang created the team's first tap dance routines, the brothers' absorption of technique came from watching and working with the great black tap masters whenever and wherever they performed at the same theaters. They practically grew up backstage at the Apollo Theatre, where they were witness to the performances and the advice of such tap dance legends as Charles "Honi" Coles, Howard "Sandman" Sims, the Nicholas Brothers, and Teddy Hale (Gregory's personal source of inspiration). Gregory and Maurice then grew into the Hines Brothers. When Gregory was eighteen, he and Maurice were joined by their father, Maurice Sr., on drums, becoming Hines, Hines and Dad. They toured internationally and appeared frequently on The Tonight Show, but the younger Hines was restless to get away from the non-stop years on the road, so he left the group in his early twenties and "retired" (so he said) to Venice, California. For a time he left dancing behind, exploring alternatives that included his forming a jazz-rock band called Severence. He released an album of original songs in 1973.

When Hines moved back to New York City in the late 1970s, he immediately landed a role in The Last Minstrel Show. The show closed in Philadelphia, but launched him back into the performing arts, and just a month later came Eubie (1978) a certified Broadway hit, which earned him the first of four Tony nominations. Comin' Uptown (1980), though not a success, led to another nomination and Sophisticated Ladies (1981) to a third. In 1992, Hines received the Tony Award for Best Actor in a Musical for his riveting portrayal of the jazz man Jelly Roll Morton in George C. Wolfe's production of Jelly's Last Jam, sharing a Tony nomination for choreography for that show with Hope Clark and Ted Levy.

Hines made his initial transition from dancer/singer to film actor in Mel Brooks' hilarious The History of the World, Part I (1981), playing the role of a Roman Slave, that in one scene sees him sand-dancing in the desert. He followed that in quick succession with Wolfen, an allegorical mystery directed by Michael Wadleigh that is now a cult hit; in it, Hines played the role of a coroner. In 1984, he starred in Francis Ford Coppola's film, The Cotton Club(1984). Vincent Canby in The New York Times wrote about Hines' rare screen presence in the film: "He doesn't sneak up on you. He's so laid back, so self assured and so graceful, whether acting as an ambitious hoofer or tap dancing, alone or in tandem with his brother, Maurice, that he forces YOU to sneak up on HIM. The vitality and comic intelligence that have made him a New York favorite in Eubie and Sophisticated Ladies translate easily to the screen." The film was a seamless blend of dance into the framework of the narrative. The fierce virtuosity of Hines' dancing is seen in the White Nights(1985), in which he played an American defector to the Soviet Union opposite Mikhail Baryshnikov, playing Russian defector to the United States. "I haven't had a terribly traumatic experience as a black person in this world, but I've had experiences," Hines told Michael J. Bandler about the film. "My nature is to let them go--I wasn't going to be burdened with a negative attitude. So for White Nights I had to dig, but the pain was there." In 1988, Hines starred in a film that combined his penchant for both dance and drama, Tap. With full-scale production numbers filmed on location in New York City and Hollywood, and with an original soundtrack created especially for the look and style of the film, Tap became the first dance musical to merge tap dancing with contemporary rock and funk musical styles. It also featured a host of tap legends, including Sandman Sims, Bunny Briggs, Steve Condos, Harold Nicholas and Hines' co-star and show business mentor, Sammy Davis, Jr.

Hines' extensive and varied film resume includes teaming with Billy Crystal in director Peter Hyam's hit comedy, Running Scared, and the next year with Willem Dafoe, in Southeast Asia, in the military thriller Off Limits. He starred in William Friedkin's dark comedy, Deal of the Century, with Sigourney Weaver and Chevy Chase; Penny Marshall's military comedy, Renaissance Man, co-starring Danny DeVito; The Preacher's Wife with Denzel Washington and Whitney Houston, once again with director Penny Marshall; Waiting to Exhale, with Angela Bassett and Whitney Houston for director Forest Whittaker, and Good Luck, with co-star Vincent D'Onofrio. He also appeared in the offbeat ensemble comedy, Mad Dog Time, with Jeff Goldblum, Ellen Barkin, Gabriel Byrne, and Richard Dreyfuss. In 1994, Hines expanded his talents to include the role of film director. His directorial debut was the independent feature, Bleedings Hearts, shot on location in New York. A contemporary romantic drama, it explored the precarious relationship between a thirty-year-old, white, male radical and a black, female high school student.

Hines work in television is equally diverse. In 1989, he created and hosted Gregory Hines Tap Dance in America, a PBS television special that featured veteran tap dancers, established tap dance companies, and next generation of tap dancers. The film was nominated for an Emmy award, as was his performance on Motown Returns to the Apollo. On the USA Network, Hines starred with Annette O'Toole in the critically acclaimed original film, White Lies, based on the novel Louisiana Black by Samuel Charters. He also starred on TNT with Christopher Lloyd in Lewis Teague's T-Bone and Weazel; with Sinbad, James Coburn and Burt Reynolds in the comedy western, The Cherokee Kid; with Judd Hirsch and F. Murray Abraham in Showtime's urban drama, The Color of Justice; on CBS-TV with Jean Smart in the thriller, A Stranger in Town; on the USA Network in the psychological thriller, Dead Air, and in Subway Series, the anthology-style film series for HBO directed by Ted Demme. Hines made his television series debut in 1998, playing Ben Stevenson, a loving single father hesitantly re-entering the dating world on CBS-TV series, The Gregory Hines Show. As Ben Doucette, he made up part of the gifted ensemble that won NBC an Emmy Award for Best Comedy Series in 2000 for Will and Grace. He also earned an Emmy Nomination as Outstanding Lead in a Miniseries or Movie for his portrayal on Showtime of the legendary and groundbreaking dancer/film star Bill Robinson in Bojangles, and also starred in the ABC/Touchstone mid season television series, Lost At Home. For three years, Hines was the voice of "Big Bill" on Bill Cosby's animated series for Nickelodeon, Little Bill. He voiced and sang one of the key characters (alongside Eartha Kitt, Patti LaBelle and Vanessa Williams) in the Fox TV/Coca Cola animated musical special, Santa Baby. He made his television directorial debut with The Red Sneakers, for Showtime, and also appeared in the film, which centers on a 17 year-old high school student--more mathematician than athlete--who becomes a basketball sensation through the gift of a magical pair of sneakers.

Throughout an amazingly varied career, Hines continued to be a tireless advocate for tap in America. In 1988, he lobbied successfully for the creation of National Tap Dance Day, now celebrated in 40 cities in the United States and in eight other nations. He was on the Board of Directors of Manhattan Tap, the Jazz Tap Ensemble, and the American Tap Foundation (formerly the American Tap Dance Orchestra). He was a generous artist and teacher, conscious of his role as a model for such tap dance artists as Savion Glover, Dianne Walker, Ted Levy, and Jane Goldberg, creating such tap choreographies as Groove (1998) for the Jazz Tap Ensemble, and Boom for the 1997 Gala for President and Mrs. Bill Clinton, filmed for (ABC) at the Ford Theater in Washington D.C.

Like a jazz musician who ornaments a melody with improvisational riffs, Hines improvised within the frame of the dance. His "improvography" demanded the percussive phrasing of a composer, the rhythms of a drummer, and the lines of a dancer. While being the inheritor of the tradition of black rhythm tap, he was also a proponent of the new. "He purposely obliterated the tempos," wrote tap historian Sally Sommer, "throwing down a cascade of taps like pebbles tossed across the floor. In that moment, he aligned tap with the latest free-form experiments in jazz and new music and postmodern dance." The New York Times dance critic Anna Kisselgoff described Hines' performance in 1995: "Visual elegance, as always, yields to aural power. The complexity of sound grows in intensity and range."

In addition to his work on the dance and theatre stage, in film and on television, Hines' wide-ranging career also included making a 1987 album called Gregory Hines, and writing introductions for books Brotherhood in Rhythm: The Jazz Tap Dancing of the Nicholas Brothers by Constance Valis Hill, and Savion! My Life in Tap, a biography by Mr. Glover for children. Everything Hines did was influenced by his dancing, as he told Stephen Holden in a 1988 interview with The New York Times: "Everything I do," he said, including "my singing, my acting, my lovemaking, my being a parent." He died in Los Angeles at the age of fifty-seven.